brought to you by WBR Insights

Back in 2015, the University of Hawaii made a pledge to become the first campus in the United States to significantly reduce its reliance on fossil fuels and work towards generating 100% of its energy from renewable energy by 2045.

In 2018, with help from the technology and field service expertise of Johnson Controls, they are well on their way to achieving this goal. In fact, Johnson Controls has reached the #30 spot on Fortune Magazine's Change the World list of companies working to help the planet and solve social problems.

The main driver behind this is the innovative solar photovoltaic energy and battery storage system developed, installed, and maintained by Johnson Controls. Solar energy generates zero pollution and zero greenhouse gasemissions, and excess energy generated by the system can be stored in batteries and used as required. 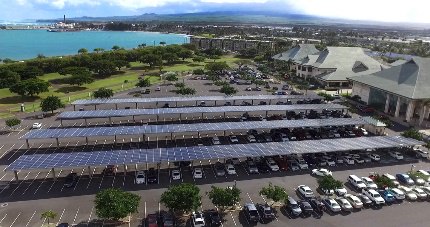 "With the implementation of phase two, these five UH campuses will have reduced fossil fuel energy consumption by ~14 GWh annually (45 percent) and added ~13 GWh renewable energy generation," said UH Vice President for Community Colleges, John Morton. "We are proud to move the entire University of Hawaii System closer to its net-zero energy mandate, to celebrate UH Maui College's achievement and to position the O'ahu community college campuses within reach of 100 percent renewable energy generation."The project is set to generate in excess of $79 million in energy cost savings.

Of course, none of this would matter if Johnson Controls didn't have the facility to manage the site, provide ongoing support, and provide field service for the initiative.

The energy storage system in play can be seamlessly integrated with existing building automation systems. This allows the workload of managing building systems to be reduced significantly by limiting the number of independent systems which need to be deployed and serviced. Time spent in the field by technicians is therefore reduced, as the new systems can be integrated with existing maintenance schedules, allowing for collective monitoring and control.

Incorporation with existing systems will also boost holistic building performance providing further economic value and return on investment. Systems can be configured to provide the greatest economic benefit to the client with features that include peak shaving, load shifting, frequency regulation, demand response, and backup power, allowing field engineers to create the perfect balance of performance and economy, according to the client's needs.

Johnson Controls also provides local and remote real-time monitoring of all systems within the power network and incorporates it into its existing service offerings. Diagnostics and control can be performed both on and off-site via cellular networks, wireless internet monitoring, and 1G ethernet interfaces.

Climate change is starting to have very real impacts on our planet. According to scientific consensus, if mankind does not start taking radical steps to reduce our reliance on fossil fuels, plastics, and other pollutants, it may not be long before the damage is irreversible - assuming that particular ship has not already sailed.

It's encouraging to see big brands such as Johnson Controls working with institutions such a UH to work towards building and maintaining a more sustainable world, one which stands a far better chance of being around for generations to come.

"Hawaii's leaders set the national example of sustainability and renewable energy standards with the net-zero mandate by 2035 for UH, and we're proud to partner with the university to help it reach that commitment and aim for UH Maui College to become the first campus in the U.S. to generate and store 100 percent renewable energy onsite, 16 years ahead of schedule," said President of Building Solutions for North America at Johnson Controls, Rod Rushing.

Download the agenda today for more information and insights.